I have used the Eventide H3000 in professional studios for many sessions over many years.  These units, including one preset in particular, are used on every mix that I perform.  The texture, width, thickness, warmth and tonal characteristics generated by the “MicroPitchShift” setting are vital to the controlled wetness of my mixes (and countless other mix engineers’ mixes).

I was over-the-moon excited when Soundtoys announced Little MicroShift in 2014.  Finally, I could have the power of the H3000 in the box.  I now had access to the best chorus hardware AND the best chorus plugin. 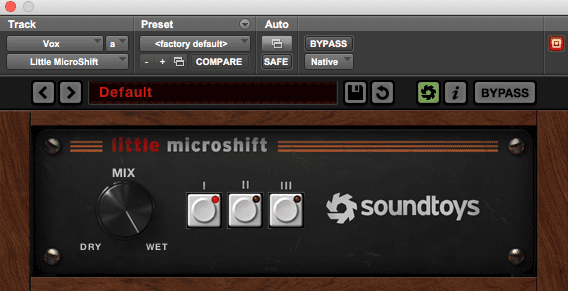 When Eventide released the H3000 in 1986, it was the first unit to offer true diatonic pitch shifting, as well as many other features.  Before we get to Little MicroShift, let’s talk a bit about using the hardware unit and its famous setting.

The H3000 likes dual-mono input.  Some settings either require dual-mono or react better with signal hitting both sides of the unit.  In a professional control room, this is as easy as patching an aux through a mult, then taking two splits from the mult and entering the input of the H3000.  The Line button on the lower-right of the unit must be engaged as well.

The most famous and widely used setting on the H3000 is preset #519, called “MicroPitchShift”.  It defaults to creating a slight delay on copies of the original signal, then detuning the copies +9 and -9 cents, creating a gorgeous chorus effect that is not perceived as being out of tune (because the pitch adjustments are so small).  The MicroPitchShift effect is instantly recognizable to the ear  and provides a high level of familiarity to whichever vocals or instrumentation it is being applied.  On my mixes, I use this effect on any or all of the following: lead vox, background vox, synth bass, organic bass, synth pads and chords, synth leads and anything I need to sound thick and wide.

Upon release of Little MicroShift, I was anxious to try the “H3000 #519” preset.  I knew right away that I could begin applying the methods I was using on the consoles to projects that were in the box. 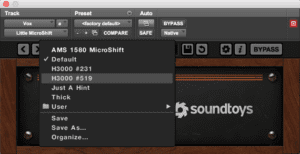 Little MicroShift is not pitch correction.  It emulates the H3000 and another popular, time-based, hardware unit from the 1980’s by AMS called the DMX 15-80s. Two of the creators of the original H3000 are responsible for Little MicroShift (and also founded the Soundtoys company).

They say:
“We designed Little MicroShift to nail the vibe of sought-after hardware pitch shifters like the Eventide H3000 and the AMS DMX 15-80s.
MicroShift captures the quirks of the originals including saturation and even the different de-glitching algorithms used by these units. So now you can have the big, wide sound of the original hardware with a simple and refined interface that makes getting those tried-and-true sounds faster and easier than ever.”

The layout of the plugin is incredibly simple, powerful and elegant.  From the manual:

STYLE I
Modeled on preset #231 from the H3000. We’ve pretty closely matched the delay and pitch variation (which isn’t exactly what the front panel on the hardware displays, interestingly enough), and even emulated the sound of the analog saturation present in the original hardware.

STYLE II
Modeled on preset #519 from the H3000, which was based on a different pitch shifting algorithm. This has a slightly different feel than Style I due to different amounts of delay variation and a different frequency response.

STYLE III
Modeled on a favorite setting from another vintage hardware unit, the AMS/Neve DMX 15-80. This style has much wider delay variation, different saturation characteristics, and a different, harder, ‘de-glitching’ circuit.

Sound on Sound says:
“Several plug-ins have been designed to recreate this effect, but whereas the likes of Waves’ Doubler  and Eventide’s H3000 Factory can be quite complex to set up, Soundtoys’ MicroShift is about as user-friendly as possible. It provides three ‘styles’ of widening; two are based around algorithms from the original Eventide H3000 Harmonizer (which were originally developed by the people behind Soundtoys), while the third emulates the AMS DMX 15-80. Single rotary controls govern the wet/dry mix and the amount of detuning and delay applied, while a fourth dial labelled Focus adds the ability to apply the effect only to frequencies above a user-defined cutoff point.”

In my personal experience, Little MicroShift is the best chorus plugin.  As with every plugin on the market, the results aren’t an exact reproduction of the hardware, considering that the signal passing through binary code instead of iron and wire.  But it sounds great and provides all of the characteristics of the original H3000 that make my mixes intriguing.  I trust the results I can obtain when I apply the H3000 #519 preset on all of my go-to vocals and instrumentation.  Have you used Little MicroShift?  Or shot it out versus the other H3000 models?  Share your results in the comments below and let’s talk about it.